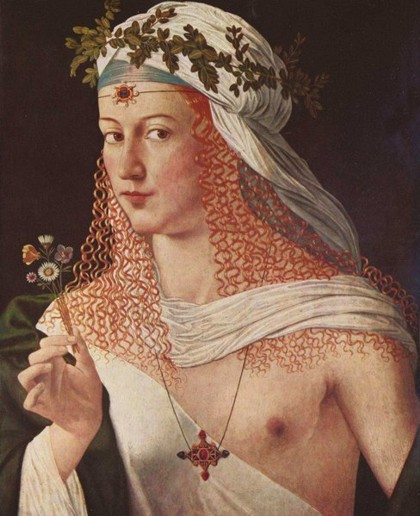 Lucrezia Borgia has been maligned over the centuries, charged with poisoning, incest, and complicity with her father, Pope Alexander VI, and brother Cesare in their political assassinations.   The blackening of her name began with the enemies of the Borgias in Rome and was enthusiastically endorsed by the prurient Victorians.

It has taken a long time to rehabilitate the woman who, as her biographer admits, by the age of 20 had a shocking past.  She was forced into a first marriage at the age of 13 for political reasons, and made to divorce at 17 for similar reasons.  She had an illegitimate child by a lover who was murdered and thrown into the Tiber.  Her second husband was assassinated on orders of her brother, motivated by politics and jealousy.   Unsurprisingly, the Duke of Ferrara fought against the proposal for his eldest son to become Lucrezia’s third husband, sending anguished appeals to the King of France, who had an interest in Italy, to save him from this fate.

Bradford, returning to the Borgias after biographical forays into the dynasties of the Windsors and the Kennedys, makes it clear that Lucrezia, while aware of her father and brother’s infamy, was brought up in a world where male dominance was taken for granted and had to accept situations as they were.  “She shared the curious mixture of piety, sensuality and complete indifference to sexual morality that was a feature of her family but, when she was in a position to express herself, she would prove to be a good, kind and compassionate woman.”

It must have been a trial to have such a father, “the most carnal of men,” who at 70 was reported to grow younger every day and demanded that everyone to join him in partying till the early hours.  After the murder of her second husband, Lucrezia sought refuge in a convent, not only to give way to her grief – the Pope hated to see gloomy faces around him – but also to establish control of her life.

As it happened, her aims and those of her father coincided.  Her marriage to the heir of Ferrara would remove her from her overwhelming relatives in the Vatican hothouse, and give her a new standing as the future Duchess of the oldest, most aristocratic family in Italy.   The Duke eventually conceded, though incensing the Pope by bargaining “like a tradesman” over the dowry.  Borgia, touchingly, ran from window to window at the Vatican to catch a last glimpse of his beloved daughter as she rode away.

Lucrezia charmed her widowed father-in-law on her arrival. Even his son Alfonso, fulminating against the forced marriage, changed his mind.  As is evident from her portrait she had a seductive beauty and believed in high maintenance, spending hours washing her long blonde hair.  There followed a series of miscarriages and still births until finally Lucrezia gave birth to their first son.  Bradford suggests Lucrezia’s difficult pregnancies were in part due to her husband’s syphilis, an occupational hazard for a virile Renaissance prince.

As Duchess of Ferrara, Lucrezia came into her own, ably managing the state while her husband was away fighting the wars endemic in 16th century Italy.  The marriage lasted until Lucrezia’s death, at 37, from childbirth.  Bradford sees it as becoming in time a happy and equal partnership.  A previous biographer, Maria Bellonci, suggests Alfonso’s jealousy blighted their relationship.  He had cause for jealousy, as Lucrezia’s roving eye chanced first on Pietro Bembo, the poet, and later on Francesco Gonzaga, Marquis of Mantua, her brother-in-law.

Bradford claims Gonzaga, rather than Bembo, was the love of her life.  He enticed her to Mantua, but his wife, the formidable Isabella d’Este, may have been an impediment.   Cryptic letters went to and fro via a trusted messenger as Lucrezia tried to engineer another meeting.  After their messenger was found dead in Ferrara, with 22 stab wounds and his hair pulled out, Francesco went decidedly cool on the idea.  Once again, Lucrezia’s charms had been fatal.